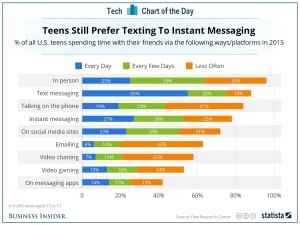 According to a recent survey of more than 1,000 teens by the Pew Research Center, old-fashioned texting is the dominant way teens keep in touch with their friends, beating out instant messaging apps and really old-fashioned face-to-face meetings.

As tech news site Business Insider notes, “Texting is still the only universal way to get in touch with all your friends (at least if they have a cell phone with text capabilities, and who doesn’t?). Most messaging apps work only with friends who happen to be on the same platform.”

The Pew research data was compiled by Statista and published by Business Insider.

That’s right: All you need is a phone and you can receive SMS updates from any Twitter account. That can be a handy way to get alerts from news organizations, weather updates, or sports scores from your favorite teams.

The company said last week that “the vast majority” of the active users it added last quarter came from “SMS Fast Followers.” Those are people who sign up via SMS, without creating a Twitter accounts. Those SMS users accounted for 14 million users last quarter — almost all of the new users Twitter added during that time.

If 14 million people became “SMS Fast Followers” last quarter, there must be something to it.

Here’s how to do it yourself:

That’s it! You’ll get updates from that Twitter account. If you want to, you can follow more accounts by sending separate “Follow” commands for each one. However, there’s a daily limit to the number of updates you can receive. If you hit that limit, Twitter will send you a text message and ask you to upgrade to a full Twitter account if you want more updates. You can do that via SMS too.

What other Twitter handles give you useful SMS alerts? Let us know in the comments below!

Press 1 to say ‘Happy Birthday’ on Facebook via SMS

If you’ve enabled SMS notifications in Facebook, the social network rolled out a new feature this week.

It will send you a text message when one of your friends’ birthdays rolls around.

To wish them a “Happy Birthday” all you have to do is reply to Facebook’s text with a message containing a single digit: 1.

That’s right: No more shopping for birthday cards. No more picking up the phone. You don’t even have to open the Facebook app and manually type out “H-A-P-P-Y—-B-D-A-Y” any more. All you have to do is reply to a single message with “1”.

Lazy? Yes. Thoughtful? Arguably. Maybe it’s time to turn on text message reminders in Facebook now so you, too, can capitalize on this labor-saving tip. 🙂

3 out of 5 people on earth use SMS texting.

According to this amazing infographic from MBAOnline, 4.2 billion people worldwide have phones that support texting. That means that SMS reaches many times more people than the internet — and it’s changing lives around the world. How has texting changed your life?

END_OF_DOCUMENT_TOKEN_TO_BE_REPLACED

How to send email to a TracFone: Now this gets a bit tricky, because TracFone actually purchases its cellular service from a bunch of other carriers. Each one of those carriers offers a way of sending email to their phones — but you don’t know off the bat which carrier you’ve got.

So here’s how you find out: Send a series of email messages to the following addresses. Substitute your TracFone’s number for the number in each case:

One of those messages will probably get through to your phone. When it does, hit “reply” on your phone and send a short text message back.

You’ll get your reply in your email program — and it will show the email address of your TracFone. Easy as that!

Too much work? You could also try entering your phone number in this reverse cell phone number lookup, which will tell you which carrier “owns” that number. Then look for that carrier in the list of carriers to the right, and use the instructions there to find your phone’s email address.

(Tip of the hat to Bryan Waters for figuring this out!)

We’ve been getting a lot of questions about how texting works with Cricket Wireless. Well, here you go! If you’ve got a Cricket phone, here’s what you need to know about SMS.

To send a message to a Cricket subscriber (or up to 5 subscribers at a time), use the Cricket Wireless send a text form online. It’s free!

Text Messaging to Groups of People With Betwext

Texting works best when you’re sending messages to one person at a time. But what if you want to use SMS to communicate with a group of people? It’s not easy.

Most phones don’t make it easy to send texts to more than one person at a time. Even when you can do this (as with the iPhone), anyone who receives your message can only reply to you. That’s inconvenient in a lot of ways. For instance, what if you wanted to organize a meetup with six of your closest friends while you’re all out and about?

A new for-fee service called Betwext might be able to help. It’s kind of like text messaging with a “reply-all” function.

The way it works is you set up an account with Betwext and purchase credits. Then you create groups of people you want to communicate with, and enter phone numbers for each of them.

When you want to text one of your groups, you just send a text message to a special Betwext number and it forwards your note to everyone on that group. If anyone replies to the message, their reply will go first to Betwext, which will then forward it on to everyone in the group. Voila: Instant “reply-all” for SMS!

Setting up and managing your groups is all done through a web interface, so you need to have the groups set up before you’re out on the town, texting.

It’s not free: Betwext charges for its service. If you send 200 messages/month, it’ll cost you $9 per month. For 1,000 messages, Betwext charges $40/month. That’s on top of any text messaging fees your carrier charges you. And the way Betwext works, it counts each message it sends or receives as a single message. So if you send a message to 5 people, Betwext will charge you for 6 messages: One for the message you sent to Betwext, and one for each of the 5 messages it sent out to your group.

It’s not particularly cheap, but for coordinating via SMS, Betwext might be just the ticket.

Keep Your Texts From Getting You Into Trouble With TigerText 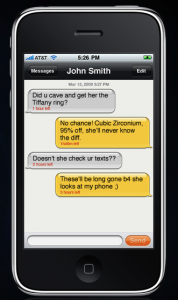 He might not have had that problem if he’d used the cleverly-named TigerText, which promises it can let you “send texts that don’t live forever.”

TigerText is an application that runs on your iPhone. (Android and BlackBerry versions are planned soon.) To use it, the people you’re exchanging messages with need to have the TigerText app as well.

When you send a message, you can specify how long the message will stick around. After the specified time period, it’s deleted from TigerText’s servers — and both of your phones. No incriminating evidence left!

You can even create messages that can only be read once, and then self-destruct as soon as they’re read, Mission Impossible-style.

Here’s the catch: It’s not really SMS. Yes, you’re sending short text messages back and forth. But you’re not using the SMS text messaging service that works with the vast majority of phones out there. It only works if both people — the sender and the recipient — are using TigerText.

Still, if you’ve got a guilty conscience, or something you just plain need to hide, TigerText could be a clever way to do it.

In Haiti, 4636 Shortcode Can Help Save Lives

If you are in Haiti and need to report an emergency situation, send a text message to the shortcode 4636.

This works with any SMS-capable cellphone on the DigiCel network.

Messages sent to that code will be entered into a database. A group of volunteers with an organization called Ushahidi will read each message, figure out where it’s coming from, and relay the necessary information to rescue teams. In some cases the response can be extremely fast:

“The average turnaround for us receiving a message and having a geo-coordinated and translated report to teams on the ground is about 10 minutes,” one volunteer told a Wired reporter.

It has already saved lives: In one case, someone sent a message to 4636 about a group of schoolchildren trapped in a collapsed school. Ushahidi volunteers were able to pinpoint the location with great accuracy and send a rescue team, according to the report on Wired.

For more information: The 4636 SMS Shortcode for Reporting in Haiti

Send an SMS to Space

Hello! R U out there?

Here’s your chance to make first contact with an alien life form, by sending a 160-character text message into outer space.

An Australian science magazine, COSMOS, is working with NASA’s Jet Propulsion Laboratory to deliver the messages by beaming them in the direction of Gliese 581D, an exoplanet that scientists think might have a chance of supporting Earth-like life.

To send a message, go to HelloFromEarth.net and enter your message on the form there. You’ll need to register by supplying your name, email, and hometown, and optionally subscribing to the COSMOS email newsletter. Do it before the end of Sunday, August 23, 2009.

On August 24, all the messages received will be bundled into a text file, encoded in binary, and beamed into space from the NASA/CSIRO Canberra Deep Space Communication Complex at Tidbinbilla, near Canberra, which has a 70-meter antenna.

Gliese 581D is 20.3 light-years away, in the constellation of Libra, so it will take a bit more than 20 years for the messages to arrive. As for a response? Well, don’t hold your breath. There’s no guarantee that the aliens will understand SMS abbreviations.